My mother always told us not to play with our food when we were kids but when you're a grown-up botanist you just can't help yourself: it's so interesting. I doubt whether zoologists get quite so much pleasure from this activity because animal food is usually dismembered and cooked to oblivion, whereas a lot of the plant food that we eat is more of less intact and open to easy investigation. 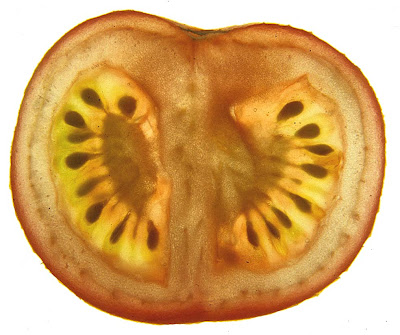 This slice of tomato, Solanum lycopersicum, eventually destined to be part of my BLT, shows the essential characteristics of the fruit, which is botanically a berry - defined as a fleshy fruit derived from a single ovary. In the tomato's case it's a multi-seeded berry, with each of the numerous individual seeds attached to the central placenta via its own vascular supply. You can see in this section that the fleshy fruit wall - the pericarp - is divided into distinct layers: the outer exocarp (with more concentrated  red pigment); the mesocarp; and the endocarp which is partly juicy and fills the fruit chambers (loculi) that surround the seed. 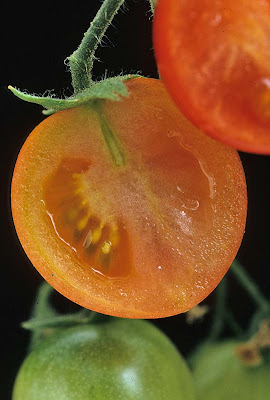 It has all evolved to attract a hungry animal and those seeds in the fruit loculus are perfectly capable of passing through the mammalian gut unharmed. That's why feral tomato plants are often a prominent feature of sewage farms. Seeds of the distinctive yellow fruits of the Galapagos tomato, Solanum cheesmaniae, endemic to those islands, are eaten by Galapagos giant tortoises that disperse the seeds (slowly and not very far away) in their droppings. 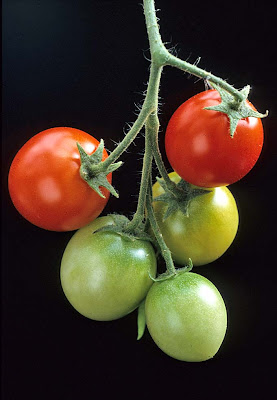 Tomatoes are said to have been introduced into Europe by the Spanish conquistadors, who found that they were already widely cultivated by Mesoamerican civilisations when they arrived in the New World. For centuries tomatoes were viewed by Europeans with suspicion and considered to be poisonous. Somehow the idea that they were aphrodisiacs arose, first in Italy then in France and finally in England and they became known in all three languages as 'love apples'. The term persisted for a long time and in my copy of Everyman His Own Gardener:The Complete Gardener, written by Thomas Mawe and John Abercrombie and published in 1855 - and which you can download here - they are still referred to both as 'love apples' and tomatoes, although by that time their tasty flavour and nutritious qualities were recognised. 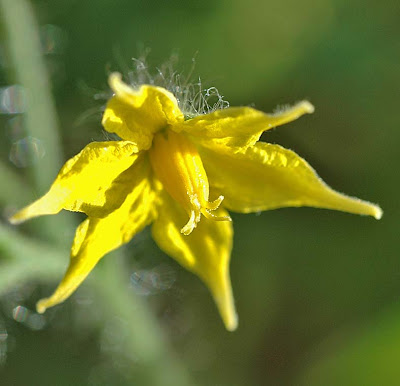 Modern cultivated tomatoes tend to be reliably self-pollinated, with their stigma hidden inside a ring of stamens that shed pollen directly onto its surface, but in wild species the stigma protrudes well beyond the end of the stamens and requires an insect to transfer pollen to it. This is the flower of a cultivated tomato, with the anthers just beginning to shed pollen onto the stigma hidden within.


Part of the pleasure associated with eating a tomato comes from the aroma, which is always far inferior in supermarket chiller-cabinet fruit to the sensory qualities of a warm, ripe tomato picked directly from a plant on a summer's afternoon. That alone makes them worth all the effort needed to grow them, even though it's more expensive to do so. I like the smell of the plants as well when you brush against them in the greenhouse and much of that emanates from the surface hairs, or trichomes, which cover most of the plant. 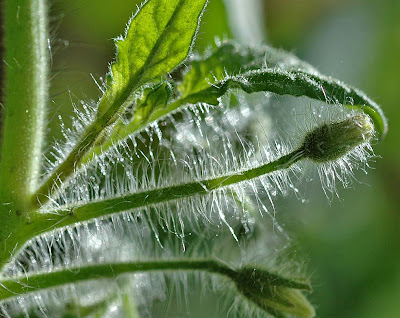 There are two kinds of trichomes on tomatoes - long, simple hairs and short glandular hairs whose heads of swollen cells are filled with aromatic compounds. 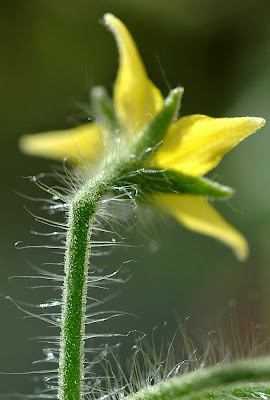 You can see both here, on a flower pedicel, with the very short glistening glandular hairs covering it's surface.

Here, at higher magnification, you can see just how densely packed they are. Some tomato genotypes have glandular trichomes that contain particularly high concentrations of insect-repellent volatiles, and there's now a lot of interest in transferring this characteristics to cultivated tomatoes, to reduce the need for growers to use chemical pesticides to tackle aphids, red spider and white fly, which can blight the life of an avid tomato grower. 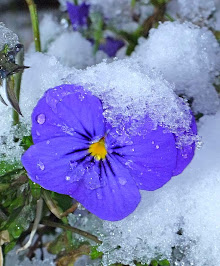 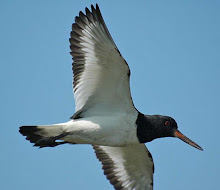